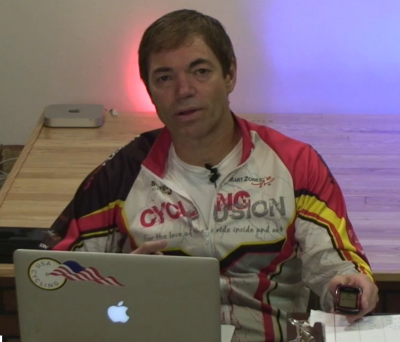 The first two video blogs showed the detailed process of performing power tests on the Keiser m3 bike with Garmin Vector power pedals mounted on them so that the power shown on the Keiser m3 can be compared to the power being measured by the Vector pedals.  As you know, the m3 displays power based on a calculation or table within the computer that is a function of the magnetâ€™s position with respect to the flywheel and the speed of your pedaling (cadence or RPM).

The standard approach considered most accurate and reliable in the industry is to measure the power where it is applied — somewhere between the feet moving those pedals, and the axel of the wheel being propelled forward by the pedaling motion.  Power meters can now be found in any number of places along that continuum; from the pedals to the crank arms to the bikeâ€™s bottom bracket and the most widely used place of all – in the hub of the rear wheel.  These power meters contain strain gauges that literally are sensing the torque or force being applied as you pedal.

It is these power readings that are then recorded on the Garmin 500 bike computer that I paired to the Vector power pedals to get a true reading of power being exerted during each pedal stroke.  In fact, there are strain gauges in each pedal so that it also reports on the differences in power generated from each pedal; left and right.  So we now can know what the real power numbers are as we work out on the Keiser m3.

This is the 3rd video in the series that shows the exact process I underwent to take the data generated (from both the Keiser bike and the Vector pedals ) during these tests and record them.  The recording of data included both graphic snapshots as well as detailed numeric data from both the Garmin and the hand written readings taken during the actual test (since the Keiser offers no way to retrieve the data from their computer).  These were all then copied into a single spreadsheet for comparison and analysis. 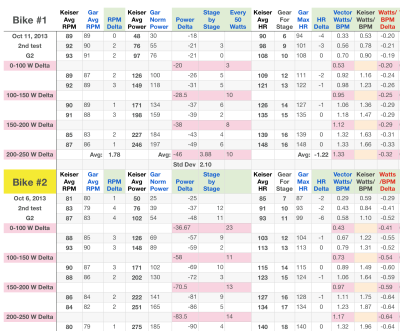 I warn you, if you are not a data geek, and are not experienced in the unique joys of number crunching, this video may not be safe for you. Make sure to have soft surroundings as you watch this video. Without the proper training and experience, you may find yourself falling asleep at an alarmingly fast rate. Viewer beware! Click the link below if you dare… I mean to watch the video. â˜º 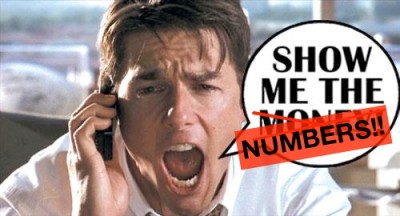 It's time to look at the data gathered so far.

Time To Dig In
So weâ€™ve painstakingly done everything possible to setup and prepare our methods for a solid research project — at least as solid as any “non-university” research setting can hope for. Weâ€™ve not only established a consistent protocol for conducting the tests, but weâ€™ve also made sure to not do too many in any one day, nor to use different testers to eliminate potential influences to our results.

Once we executed these tests on about a dozen bikes, I wanted to start to analyze the data, and thatâ€™s when it occurred to me that we needed to make sure that the numbers I was about to analyze were reliable and repeatable from bike to bike. My last post demonstrated the process of re-testing to insure that very thing. After doing retests on about 6 of the 12 bikes, it is now finally time to review the data and see just what is what.

Letâ€™s Start With The First 2 Bikes
Each day I tested only 2 bikes — to make sure I was fresh each time. So naturally, my first peak at the numbers (and I try not to look at them until I am well into the research so that initial impressions do not subconsciously alter my performance as more tests are conducted) came after these first 2 retests. Remember, Iâ€™m into the research project a couple of months now without letting myself “have a taste” — thatâ€™s pretty tough for a data-geek like me â˜º.  So below you will see the first two bikes retested. Letâ€™s go over the columns so we can understand what we are looking at. 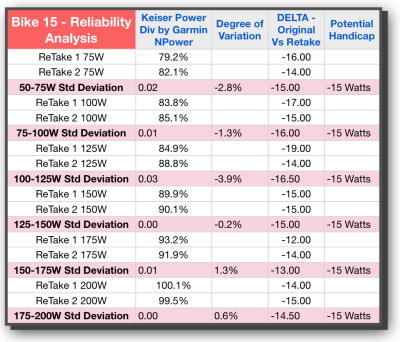 The first column represents the 25 Watt stages that were used to get the average power numbers from. These were “settled into” for 2 to 3 minutes at each of these stages. More specifically I used the Keiser console to establish a steady wattage level during each stage, and then once the 2.5 minutes were up, I stopped the keiser to get the true average (which typically was within 5 watts of the target) and we also lapped the Garmin so it would later give us the average or “Normalized Power” (NPower is how I have referred to it on the table) from the Garmin Vector Power Pedals.

Column: Keiser Power Div by Garmin NPower
By dividing the calculated power of the bike by the measured power from the Vector power pedals, we will see by percentage just how close they are to each other. Remember, we are not concerned about pure accuracy per se — we know the calculated power is going to be inaccurate by its nature — we simply want to know how much it is off, and if that amount is reliable every time re ride that bike. Each percentage is a reflection of both bikes at a specific wattage on one test.

Column: Degree of Variation
If we now take the difference between the first test and the next, we can get at how reliable the bike is between test sessions. This is the KEY metric for our purposes during this phase of the study; validating that each bike within itself is reliable. From a practical standpoint, we need the difference between tests to be low if our handicaps are going to be valid and useful from one class to the next. In looking at both Bike 15 and Bike 9 we see that these are indeed fairly low — an initial good sign — and there is only one instance where the difference is over 10%. Thatâ€™s actually a lot less than I expected.

Column: DELTA Original vs Retake
This is a “pre-handicap” column — showing the exact wattage differences at each stage of power averages. While this will produce precise numbers with decimals, we know that a practical application of handicaps would likely need to be in increments of 5 so that the math is easier when performing that handicapping in ones head. We could also use this to send to an automated system if one was ever created that could account for bike variations in the software (an insightful feature I would create if I were the purveyor of such software).

we use this column to evaluate the exact differences and averages before we designate a specific handicap number.

This column is the one that also really shows the amount of variation from one bike to the next. On Bike 15 we are averaging in the teens with wattage differences, whereas Bike 9 is averaging in the 20s and 30s. Thatâ€™s quite a spread.

Column: Potential Handicap
This column would represent the entire motivation and impetus for all of the time and energy being spent on this research. We want to handicap the bikes! If youâ€™ve read my eBook on Power (if not, no worries an updated iBook is due out soon — shameless plug apologies â˜º ), you will know that Power is not linear in its progression. As such we can not just use one number as the handicap and apply that to all wattage levels. If you look at all 4 bikes, you will see, with the exception of Bike 15, the differences get bigger and bigger as the wattage level increases. This is the exponential nature of power and the reason why I propose a handicap value for every 25 or 50 watts.

How About Some Analysis
Up to now, weâ€™ve only sprinkled the analysis or possible conclusions as Iâ€™ve described each column. However, in order to even think about drawing conclusions, we will need more data points than just 2. Letsâ€™ show four more bikes so we can see if there are some patterns emerging when we have 6 total bikes and their retests — giving us a total of 12 tests or sets of data points to consider. 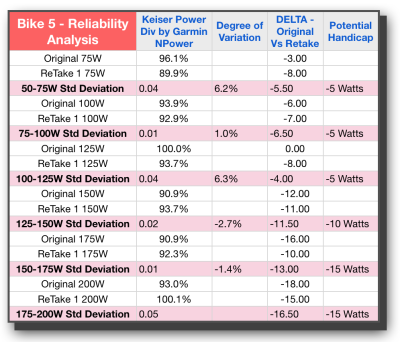 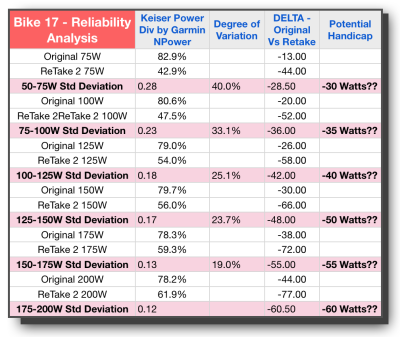 Looking at Bike 5 Iâ€™m feeling pretty good that itâ€™s similar to #9, this time with all variation under 10% and the good power-like escalation of Potential Handicap wattage going up as a power curve would reflect. Taking a look at Bike #17 though, and I had to do a double take — WHAT?? or should I say “WAATTT!” The degree of variation is crazy. Not only that, even looking at it from a practical perspective, the Potential Handicap, aside from being huge in the 30 to 60 watt range, is simply not close to either of the trials in this study. While 30 Watts may indeed be the average between the two tests, with one being 13 and the other being 44, who knows if 30 will be too much or too little. In fact all of the stages are reflected as pretty wild for Bike 17. 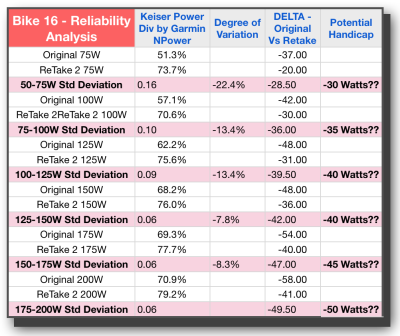 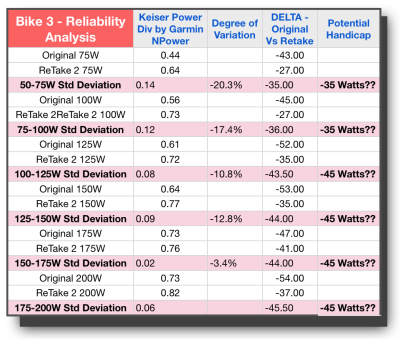 Unfortunately the bad news continues with Bike 16 and Bike 3.  Both of these bikes have variations well above 10% and similar wide swings in Watts for the original delta between tests.  In addition, we have bike #3 not demonstrating the proper power curve through the last 4 stages, but instead settling into one consistent difference in wattage.

Looking again specifically at these last 3 bikes, and there is no way I would be comfortable handicapping these bikes and expect it to be consistent.  So all in all, we have 3 bikes that look like they would lend themselves to reliable handicaps, and three that do not.  With a split decision like that, we are all but a hung jury here.

Since I recognized that I might be the problem — I am the only one conducting the tests – and while it stands to reason I would get better and more consistent over time not less, I did not want to rule that out.  This data left me scratching my head more than anything else — more questions that need to be anwered.  It was time to bring in bigger guns than I have.

The next blog will have another video where we brought in a professional statistician to help us get to the bottom of this.

After 37 years of waiting we finally have another ... END_OF_DOCUMENT_TOKEN_TO_BE_REPLACED