On January 20 John Macgowan posted Would you teach for SoulCycle? If you have not read it, try to find the time. It generated a lively discussion of 17 comments between eight of us. The post highlights excerpts from an article in New York Magazine that ran on January 14, 2013. An interesting read as well pointing out that Soul Cycle instructors are earning $50K and more.

Coincidentally, Soul Cycle is coming to San Francisco, opening a studio inside an Equinox. On Friday February 8th they invited us local instructors to participate in a ‘Soul Cycle Master Classâ€™ to get a sense of what Soul Cycle classes are like. Why? Because on Saturday February 9th Soul Cycle was holding auditions for instructors who would – should they make the grade – be the first to do Soul Cycle (SC) classes in Northern California. I wanted an audition.

I attended the Master Class looking forward to the experience. SC owners Elizabeth Cutler and Julie Rice were there for opening remarks. A very buff/cute and perky twenty something instructor originally from Santa Cruz led our 45 minute class.

I was on the bike warming up next to an acquaintance. We were chatting easily five minutes before class started and I was holding about 95bpm. (I always wear my heart rate monitor) Class starts, in less than two minutes I was above T2 and thats where it stayed for a lot longer than I thought possible. My friend and I never spoke again.

Those of you needing a quick refresher, T2 (Ventilatory Threshold 2) is roughly equivalent to Lactate Threshold which is roughly equivalent to anaerobic threshold. Even for the most fit athletes long periods above T2 are just not possible without slowing down. I was viewing my heart rate on my iPhone app. Finally I had to turn it over so I could not see the numbers. Take away lesson: if you are doing Soul cycling, leave your heart rate monitor at home.

Our instructor spent about half her time on the bike. The other half was spent bouncing around the room ‘pumping us upâ€™. During the first thirty minutes we spent a good percentage of time out of the saddle and at high cadences. I observed a new position; come out of the saddle, rest all your upper body weight on the handle bars, and then spin at extremely high cadences. I didnâ€™t even try. We also did movements that can only be described as pushups and jumps. These I did.

The music was played so loud that it was distorted. Of course this caused the instructor to turn up her mic volume to a place where I couldnâ€™t understand a word she said. I just copied the women around me.

Thirty minutes in she sat us down and we did simulated upper body resistance training. Simulated because – ironically – there were no weights in this cycle studio. After that a couple more high intensity climbs and bam, weâ€™re done. Whew!

I think it is safe to say that I was definitely bringing up the average age in the room. I was one of three men in the full studio. My friend and I being roughly the same age and one hard body guy in his early 20â€™s. (In San Francisco this guy will easily play successfully to both genders) Not sure why men were so outnumbered but this is a female dominated arena. And, oh my could they scream with the joy of being pushed into a sweating mass. I put the average age of the women in attendance at late 20â€™s.

I think we all get that there has been a decline in what used to be a pent up demand for cycling. Clearly in the markets where Soul Cycle studio's exist there is pent up demand for this product. Indeed – if one is to believe the New York Magazine article – some riders interviewed were spending in excess of $20K per year on their Soul Cycle habit.

Why is that? I struggled with this question but, if we take a hard look at the Soul Cycle model we find that their distinction is a huge commitment to finding just the right instructors. Letâ€™s face it, at the end of the day quality instruction is still the key to successful programs. Soul Cycle management believes in their program (having perfected it), which is kind of like the American Idol of indoor cycling. They invest a lot of time and money to find a few good instructors. If one has the right stuff, the end game is worth it for SC and instructor.

How many studio owners are willing to go there? Historically, not many. And what is there?

Letâ€™s look at Soul Cycle again. Soul Cycle supports, motivates and promotes the instructor all the way to a Soul Cycle stage, if they make the grade.

Making it through the audition process is only the first step. Then off you go to their training center to learn to do it their way. If one makes it through that, then one teaches six to eight classes per week and not necessarily prime time. Still there is more. One must attend three to five classes per week taught by the studio mentors. And, one cannot teach anywhere but SC.

Having done all this your large paycheck is still not in the bank. Soul Cycle uses a tiered incentive system essentially based on how many butts are in saddles during your class. The more butts, the bigger the pay check.

Lots of work that – from my experience in this industry – few instructors and even fewer studio owners are willing to to do.

Indoor cycling isnâ€™t new any more. Simply rejuvenating existing programs isnâ€™t a trivial task, will take time, money and commitment that is rarely seen in our industry. I doubt many studio owners have so clear a vision of their Unique Selling Proposition that they would pony up the dollars to operate like the very successful Soul Cycle.

If you are wondering if I got hired, I did not go back to audition. A part of me wanted to know for sure if I had the right stuff. I believe I would have passed the audition. Iâ€™m a big enough ham and love connecting with my riders so much that – to me – making the first step seemed inevitable.

Truth is, I live one hour from San Francisco. I have other contracts in my ‘portfolio careerâ€™. I could not have committed the time or to the commute.

Yet today, I find myself getting off the bike more, bouncing around declaring to my riders that I AM here to pump them up. I guess a little bit of soul cycle goes a long way. 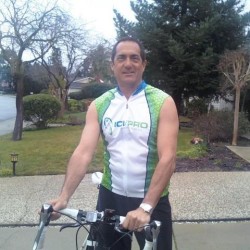 Chuck Cali
Meet Chuck Cali!
He partnered with Sally Edwards in January 2011 to market and set up operations to support ZONING, the next generation three zone heart rate training system.Chuck is an evangelist for cycling and his enthusiasm for getting America fit is second only to the head heart herself, Sally.

Pilot, flight instructor and small business owner Chuck is no stranger to excitement. His diverse background, passion to stay fit and willingness to take on a challenge make him a great fit within our Indoor Cycling Community.In addition to being a full time pilot, Chuck writes, speaks, teaches, and cajoles others to be active using the Blink heart rate monitor and ZONING programming.

Meet Chuck Cali!
He partnered with Sally Edwards in January 2011 to market and set up operations to support ZONING, the next generation three zone heart rate training system. Chuck is an evangelist for cycling and his enthusiasm for getting America fit is second only to the head heart herself, Sally.

Pilot, flight instructor and small business owner Chuck is no stranger to excitement. His diverse background, passion to stay fit and willingness to take on a challenge make him a great fit within our Indoor Cycling Community. In addition to being a full time pilot, Chuck writes, speaks, teaches, and cajoles others to be active using the Blink heart rate monitor and ZONING programming.

After 37 years of waiting we finally have another ... END_OF_DOCUMENT_TOKEN_TO_BE_REPLACED