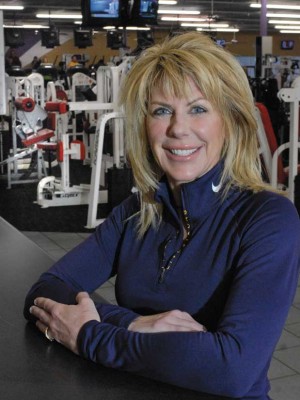 “From the lighting to the music to the actual cycling, itâ€™s a total experience. No one wins in a spin class. Itâ€™s not about competition.”

Hoots should know. She took a local spinning class shortly after outdoor enthusiast Johnny Goldberg (“Johnny G”) and his good friend John Baudhuin (who co-founded Mad Dogg Athletics) came up with the concept circa 1992, but her passion wasnâ€™t ignited until she made several trips to Miami to train under master instructors.

When she fell for spinning, she went all in.

“I came back to Albany and asked Tony if heâ€™d give us some space for a spinning room,” Hoots said. “He had an area that I think had been for women only that he said we could use. I recruited John Medlin, whoâ€™s a phenom with a skill saw, to redesign the room and started negotiating with others who could help with the makeover.

“We redid the whole room – the look, the lighting, the sound system – added a few more bikes and once we found acceptance in the community, we couldnâ€™t keep people out. Now we have a waiting list for all our classes.”

Powell, who opened Tonyâ€™s 29 years ago this May, has seen every fitness fad and fashion thatâ€™s made the rounds come and go at his popular gym. But he says heâ€™s never quite seen anything go over the way spinning has since Hootsâ€™ program evolved into a local craze.

“Weâ€™ve offered spinning here since it started; I think we started with 15 or so bikes,” he said. “It did OK, but once Barbara started teaching and making changes to our spinning room, itâ€™s just become a phenomenon. Itâ€™s such a unique activity; from the atmosphere of the class to the state-of-the-art sound system, spinning is the total fitness experience.

“Spin classes here have become the hottest ticket in town. If you donâ€™t get to a class a little early, youâ€™re not going to get a seat. And weâ€™re up to 55 bikes.” Read the rest if the story.

Here's part two of It Isn't Staying Green from ... END_OF_DOCUMENT_TOKEN_TO_BE_REPLACED