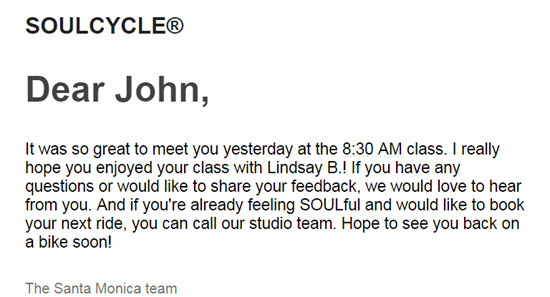 I get a lot of “Dear John” letters.

During these 45 minute scripted fitness events, the Instructor's role is split between; Performer, Cheerleader, Coach and lastly as the Director – directing the participants in their parts of the production.

If you missed any of my earlier articles about SoulCycle, you'll find them all here.

Any great musical or theatrical production begins with building anticipation in the audience. The SoulCycle location we visited has what can best be described as a waiting area. A room with multiple benches that's midway between the hall with the lockers and the primary entrance to the studio.

After I got dressed in a very nice locker room, I met Amy in the waiting area. The previous class was just ending and a stream of sweaty, smiling faces flowed out and past us, on their way to shower and change. (Yes they have showers) We chatted with a couple of women regulars (I never miss this class for anything) one told us, while waiting for an indication it was time to go into the studio. My typical experience has been when one class leaves, the next files in right behind. Not here. You could feel and hear the excitement of the 30 or so of us waiting, when a man wearing a SoulCycle shirt walked out of the studio with a handful of rags. He didn't say anything and didn't appear to need to. The group knew it was time for us to go in.

As I described in part #1, SoulCycle understands that details matter. Between classes they have a crew (it looked like three people) go in and clean everything before the next class. Every bike appeared spotless and functioned properly. Each had a clean towel across the handlebars and two clean hand weights in the little holders under the seat.

When we walked in it was obvious that the studio is a very special place. They had the lights were very low, primarily lit by the faux candles on the four corners of the Instructor platform. What was a noisy/chatty group became much quieter as everyone filed in and found their reserved bike, got set up, and climbed aboard. With 60 people in that small space and so much activity going on, I didn't see when Instructor Heather P (Peggs) walked in – but it was obvious once she cued up her music and turned on her mic.

Amy and I were two of the three new folks in that class. Heather seemed to know most everyone else in the room, greeting what seemed like dozens by name as she bounced around the room before the start. She must have reviewed her attendance list because she walked over and welcomed us both by first name.

Heather explained that this was her third class of the day and that two of her favorites would be up front demonstrating, while she conducted the entire class off the bike. The cleaning/setup crew had already prepared for this. Before we walked in there were two bikes on the Instructor platform – in my second class there was only one. 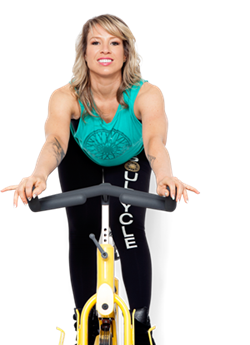 In both classes the Instructors introduced themselves and explained a little bit about the ride to come. I was surprised how both Heather and Lindsay B (who taught the second class I took) offered modifications; the need to keep enough resistance on the wheel and suggestions for taking it easy if today wasn't your day. Lindsay made the point several times; “turn it down until you can't feel anything… then add back a half turn. We never ride in here without resistance“.

Note about form. I can't remember when I saw so many people who looked so good on their bikes. And no it wasn't that they are all young females. Nice flat backs, relaxed upper bodies, very smooth pedalling techniques and I didn't see any of the wild, out-of-control crazy stuff I expected to see. Yes there is a lot of 110+ RPM in these classes – and it looked very controlled.

My idea, and it's only based on observing two classes, is that there's a lot of peer pressure between riders to look good on the bike. They know they're part of the “show” and do their best to look the part.

If you ride in a group outdoors, you've probably experienced the same peer pressure to look good – that's why many men shave their legs 🙂

I've taken this class before

Both classes I rode started exactly on time and followed the same basic profile. I wasn't keeping track of time so I don't have any specific segment lengths. Actually I didn't watch the time on purpose. I wanted to know; how long did the class feel?  It felt like it zipped by very quickly. Amy felt it was short – she normally teaches 60 minute classes.

Key Detail: These Instructors know their music exactly and teach to it very effectively. Both exhibited Group Fitness backgrounds, giving us helpful 8 count – countdowns, that always ended right with the phrasing of the music.

I was very impressed by both Heather's and Lindsay's professionalism in the way they conducted their classes. NOTE: with the one exception that Lindsay used music (hip hop) that had a lot of profanity in it and swore herself on occasion. It's not for me, but the guy with the gauges and sleeves riding next to me said he never misses her class. Throughout class they both discussed and encouraged proper form. During the weight segments we were instructed to add a bunch of load and sit up straight and tall. It was also suggested that we stop pedalling. Most slowly rolled their legs during this part.

Is there purpose to all of these extraneous movements?

Critics of SoulCycle (and similar) classes point to how non-cycling specific movements; jumps, push ups/rhythm presses, “tap-backs”, figure eights, etc… have no proven training value and/or diminish the potential training value of riding an Indoor Cycle… like an Outdoor Cyclist would. For those reasons, along with perceptions the some of these movements may be potentially dangerous, we're told we should not include these movements in our classes as they're “Contraindicated”.

Based on what I saw at SoulCycle (and other similar classes I've taken) my feeling is that critics are completely missing the point. IMO these movements are a critical part to the appeal of these classes. It is a thing of beauty, watching a room full of people exactly on the beat and rising and falling in unison. I've heard this described as “tribal” behaviour, similar to fans doing the ‘wave' at a sporting event. It's a very powerful way to connect a group of people together. And at the same time, these jumps are very challenging to perform correctly – which I feel is another reason for the success of SoulCycle that I explained in this post.

I found this element of each class interesting. After the weight segment, both Heather and Lindsay turned down the lights and described overcoming a challenge in their personal lives. Playing some trance like music, Heather explained how this week marked the five year anniversary of her sobriety and how appreciative she was of the support she'd received from SoulCycle and all of her regulars.

Lindsay did something a little different. She invited a man to ride her Instructor bike. Then described how she had lost her voice for 10 days and couldn't teach. She then put her arm around the man and explaining how he was the doctor who helped cure her vocal paralysis.

This then segued into a time where we were all asked to reflect on some personal challenge of our own. We rode in near total darkness for a few minutes with just the music. From here the intensity built in a way to communicate how we could overcome whatever it was – leading into a final big effort to finish the class.

Each class includes a three minute stretch/cooldown. How do I know it was three minutes? They both said so in their closing. With everything else tightly scripted, I'm guessing the class ended exactly on time. Here's where these Instructors diverged a little; after each did hamstring and lower back stretches while on the bike, Heather did most of her stretches off the bike. Lindsay did all of her's on the bike.

After we were told their upcoming class times and locations (there are 6 SoulCycles around the LA area and they both teach at multiple locations) we were thanked and encouraged to leave quickly. This may explain what didn't happen. I've been in classes like these where the “groupies” flock to the Instructors after class. I observed both pretty much alone after the immediate end of class. This gave me and Amy a chance to say hello to Heather and tell her that we were visiting instructors. She said she appreciated us being there and asked if we would be attending other classes while we were in town.

In case I haven't effectively communicated it here, Amy and I were very impressed by our experiences at SoulCycle. I participated in two classes, led by true professional Indoor Cycling Instructors who understand what their participants want from a class and they both delivered it.

With the exception of the horrible music (I hate Hip Hop) Lindsay played in the beginning of her class (she did win me over during her weight segment as she went around cuing proper form to multiple individuals), I didn't see anything that wasn't near perfect in the delivery of this experience.

Final note: I appreciate the 20 or so emails and Facebook PM's I received about part #1 – my preference would be that you leave your remarks as comments to this post. But if you're concerned about publicly expressing your views, your email or PM is still appreciated.

After 37 years of waiting we finally have another ... END_OF_DOCUMENT_TOKEN_TO_BE_REPLACED