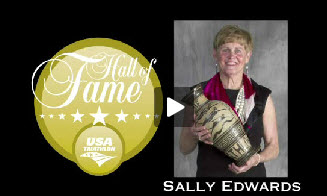 Since then Sally has been incredibly helpful to me, both in my personal training and professionally as an Instructor. She's been an amazing resource, adviser and I'm very proud of the fact that she considers me her friend 🙂

When I saw that Sally was inducted into the USA Triathlon Hall of Fame, along with Mark Allen, Scott Tinley and other triathlon greats, I just had to tell everyone!

Her introduction at the awards banquet reads:

As an athlete, best-selling author and entrepreneur, Sally Edwards has constantly displayed the passion and the plan to get America fit. She has founded six fitness-related businesses, including Fleet Feet Sports, YubaShoe Sport Snowshoes and current ventures such as Upbeat Workouts, an iPhone app for runners. Edwards has written 23 books on sports, fitness and health, including the popular title, “Triathlons for Women.” As an athlete, Edwards is a 16-time Ironman finisher and set a Master”™s world record in the event in 1988. She is a former winner of the Western States 100-Mile Endurance Run and ran in the 1984 U.S. Olympic Marathon Trials. Edwards has served as the national spokeswoman for the Danskin and Trek Women”™s Triathlon Series since 1990. She has a streak of 150 last-place finishes in the Danskin and Trek events so that no other woman has to finish last. Edwards was inducted into the Triathlete Hall of Fame in 1999.

You can watch Sally's acceptance here (scroll down to find it). True to form, when handed the microphone, Sally placed someone else in front of herself. She asked her friend and training partner Dr. Dan Rudd to speak briefly before giving her presentation. Inspirational in everything she does, you will enjoy Sally's talk about "Doing Your Best".