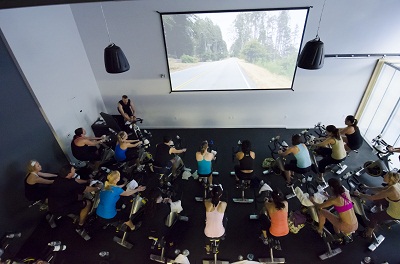 My thanks to everyone for the numerous responses to my post last week on the Commoditization of Indoor Cycling.  As captured by those responses (Chuck”™s in particular), differentiation is the strategy necessary for dealing with the commoditized product of indoor cycling.

Through differentiation — or the possibility of it — boutique studios may provide the example for the industry to start caring more about, and again raising the standards of, indoor cycling.  Commoditization can thus be seen not as negative, but as a good push, giving the indoor cycling industry a second beginning.

ICG® Academy has just opened at the OMpower Cycle/Yoga Studio in San Francisco (www.ompowersf.com).  OMpower, a boutique studio, will be the North American headquarters of the Indoorcycling Group (ICG®) and its premiere showcase facility and training hub on the West Coast of the U.S.

With the opening of ICG® Academy and its newest product, Myride®+, ICG® is differentiating itself in the indoor cycling market.  The OMpower studio features an impressive cinematic stage to display ICG”™s exciting video-cycling product, designed for use in live and virtual classes.  All cycling instructors at OMpower are Team ICG®, certified by ICG, despite other certifications they may have.  They are all trained in the use of Myride®+ and teaching classes with video.

The Myride®+ training modules are currently available, free of charge, on the ICG® website.  This is an opportunity for any indoor-cycling instructor to differentiate him-/herself from the commoditized market.  If Myride®+ successfully integrates into clubs, there will be a demand for instructors who can operate a Myride®+ console and teach with video.

In earlier posts, I”™ve written about technological advancements that will happen in 2012, regarding the use of video in indoor-cycling classes:  specialized filming, post-production editing, high-def displays, big-screen projection, media consoles that make video flexible and easy to use, compelling “virtual rides” with voiceovers by top instructors.  That technology is here and needs to be seriously considered by all indoor-cycling instructors.

View a sample of this breathtaking new technology at: Watch Movie

The two elements that I believe will have the greatest impact on indoor cycling today are power and video.  With the steady development of power-based computers, the indoor-cycling community has been buzzing about the benefits of training with watts.  I have been a “watts advocate” for many years.  However, I think few understand the benefit of this type of training.

Video, on the other hand, is understood by many.  Video is slick and exciting, markets well, and offers stronger differentiation in the eyes of the general public than watts.  If we want to get the big-box club operators excited about something, I feel they will “get” movies more than power.  I also think club members will feel the same way. 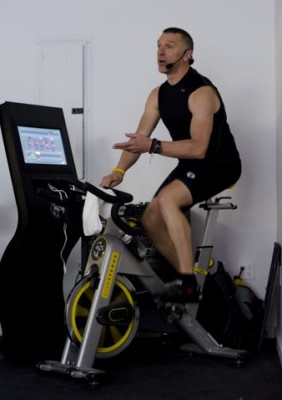 Teaching next to the Myride®+ console

What if you could...

Teaching with video takes just as much training as teaching with watts, maybe more.  As an instructor who can teach with video, you”™ll differentiate yourself from the commoditized market.  The cool thing is you can even add power-based training to a video class once the video technology is in place.  That gives video more possibilities.

If you haven”™t considered it, I strongly encourage you to learn to teach with video.  In a choice between science only and Hollywood dazzle with infinite potential, Hollywood seems to win.  That dazzle and potential are what virtual cycling and Myride®+ represent.