From Chain Junkie to Belt Convert 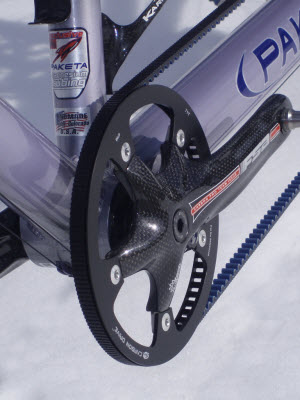 A popular choice for Performance Tandems and Single Speed bikes.

Rules are not necessarily sacred; principles are. — Franklin D. Roosevelt

My cycling background revolves around the chain.  My coach used to say, “The chain is sacred.”  It vibrates, and that”™s precisely what gives the bike its feeling of life.  The vibration brings the rider a deeper sense of, and connection with, the bicycle.  Without that vibration, without a chain, a bike is dead.   I”™ve believed, taught, and ridden this way since long before belts were introduced to Indoor Cycling.

If you had asked me back then about building a bike with a belt, I would have said without hesitating, “Don”™t mess with the chain.”

Because of my background and the coaching I got, I can argue for the chain better than almost anyone.  Those arguments, though, are philosophical, not focused on moving the industry of Indoor Cycling forward.

From my new perspective, working for a company (Indoorcycling Group, ICG) that makes a spectacular line of bikes with belts (LIVESTRONG), the conclusion is clear.  The belt requires less maintenance, has fewer breakdowns, improves pedaling technique, does not allow for momentum-based recovery, makes the rider work more efficiently, is quieter, and is safer for new riders.  It will save the club owner money, decrease liability, train participants more effectively, and make less noise.

No one on the management side of the club business would need to hear more to choose a belt.  For economic reasons alone, the industry will go this way.  It”™s generally wise to ride an elephant in the direction it”™s going.  It seems foolish to push for a chain drive in light of that.

But here”™s another thing to consider:  95% of the people who get on an indoor cycle won”™t understand that “the chain is sacred.”  They will notice only that the belt is quieter and smoother.  This was the point that sold me.  Although I tried relentlessly to find people who understood why I insisted that the chain is sacred, few people got it, almost no one felt it.  Not even instructors who were currently teaching on chain-driven bikes.

Instructors whose jobs depend on the Indoor Cycling industry should not need any more convincing.  Convincing club members who are used to chain-driven bikes, however, may take a bit more work.

The first thing I ask them to do is tell me what they like about bicycle riding.  After they go on for a while, I ask them what they like about indoor cycling.  That, too, goes on for a while.  Regardless of the individual answers, the key point is that indoor cycling is quite different from riding outdoors:  no need to balance, different movements, different hand positions, fixed gear, and more.  There are many differences, all far more noticeable than the drive train.

Next, I ask them what other kinds of bikes they've ridden.  Performance bikes only?  How do they react when they see someone riding down the road on a cruiser in flip-flops?  My point is a bike is a bike.  You”™re not a consummate rider if you fixate on what you think a bike should be.   In fact, you”™re less a cyclist than the overweight woman struggling on the hybrid.  She has more grit.  She”™s happy just to be riding.  THAT is a cyclist.

I ask them if they know which bike is the best in the world.  It”™s the one you”™re on 🙂

Cycling is sacred, not the chain.  I dig the vibrations and the sound of all the chains in a peloton as much as any roadie.  But chains are secondary to the circular motion of the pedal stroke.  The continuity of the circle is what creates the sense of peace that allows you to get outside your mind.  The chain or belt simply permits the transfer of power to the forward motion.  It”™s the motion that makes you feel like you”™re flying.

If you want to call yourself a cyclist, get past the chain.  Respect all bikes.  Find peace in a smooth circle with a belt and satisfaction in the increased work it puts your legs through without the free-spin of a chain.

With good instruction, a belt won”™t detract from the class experience — and may very well add to it.