How Safe or Unsafe are Indoor Cycling Classes?

Updated: 10/27/14 I continue to be confused by people's insistence that Indoor Cycling is in someway unsafe - so I thought I should republish this post.

My mic failed this morning. We were about 10 min. into our hour class when any small movement of my head caused the loud crashing sound many of us have experienced. I was teaching to our latest Audio PROfile, Paceline Cycling in France and had everyone set up for our first 20 min. effort when I thought; Houston... we have a problem!

I've had enough "technical difficulties" in my career as an Instructor to know the best response in this situation is no (or a very minimal) response. Any attempt to solve the problem just leads to a big disruption in your class, so you just go with it. So off goes the headset. I offered a short apology for the problem and then I explained to everyone; "I see you all as self-directed athletes and now is your chance to prove it" 🙂

Because I had given everyone a full explanation as to what's to come, they didn't have any trouble following the video and by all appearances everyone seemed to enjoy the class... and no one hurt themselves.

While we all rode along I got to thinking; "what would be different if I wasn't here?" I was thinking specifically of Jim Karanas' last post about using a virtual ride DVD as a substitute Instructor. I am convinced that,  left to their own motivation, my class would not work as hard as they do with my prompting. But would they be less safe?

My personal observation - no.

I've been participating and/or teaching Indoor Cycling since 1995. Over that 17 or so years I can only think of one specific time where someone was injured. That's once out of - it must be over a thousand classes.

The only injury that I can remember was during the first week our club began offering indoor cycling classes. We had these shiny new Johnny G Spinners and Amy was all excited to begin teaching a class that I could actually attend. I don't know if they'll came as standard, or if the club purchase them separately, but in those very first classes the bikes used some very aggressive mountain bike pedals. When I say aggressive I'm referring to how the pedal platforms featured serrated edges, designed to keep muddy shoes from slipping off. The concept of a fixed gear bike was new to everyone. During the class a woman's foot came out of the toe clip and when the pedal completed another revolution, it carved a nasty gash in this poor woman's calf. The next time I was there, every bike sported a set of smooth Schwinn triple link petals.

So where do the concerns over safety come from? Because I don't see it.

My perception is that Indoor Cycle probably the safest activity you can do at the club. Orthopedic surgeon's dream homes are built from repairing 40-year-old Achilles tendons, torn from running up and down the basketball court... treadmills spit people off on a regular basis and I personally had to have my biceps tendon reattached from curling too heavy of a dumbbell.

People trip, fall and crash into one another in step & Zumba classes. I know a number of victims who hobbled out after a yoga class complaining; I think I pulled something 🙁 And yet class after class, year after year no one gets hurt in my (or anyone else's) Indoor Cycling classes.

Am I missing something here? 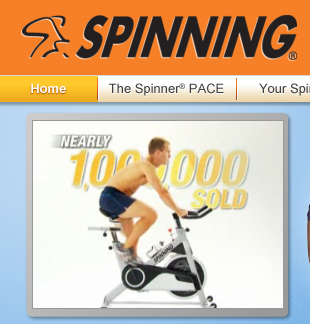 I've been digging into this more and started to think about all the home users of Indoor Cycles. Spinningtv.com says they have sold nearly 1,000,000 Spinners to at-home users. With Amy's involvement over at ShopNBC I've learned all about the crazy numbers of sales they make via infomercials. Based on the number of infomercials Spinningtv.com runs, I'm going to bet that "Nearly 1,000,000 Sold number isn't an exaggeration!

When someone orders a home version Spinner bike they also receive a selection of DVD's featuring Josh Taylor or other Instructor who leads the customer through a virtual ride. I haven't watched any of these DVD's so I can't say with certainty, but I'm going to guess that Josh and Co. lead viewers through changes in positions and intensities... just like we do in our classes.

I Googled "spinning bike lawsuit" to see if some enterprising attorney had attempted to seek damages for a user (s) who was injured riding sans Instructor. All I could find were two #1 #2 lawsuits. Each had resulted from mechanical failures, both in clubs.

My next search was for "spinning bike consumer safety" to see if there were any warnings, recalls or other notices from some regulatory agency. I found nothing.

When you consider that indoor cycling has been popular since the late 90's, there have been millions of indoor cycles sold, who have been ridden by many millions of people - at all levels of experience - over 10's or 100's of millions of hours, I'd have to say that Indoor Cycling is a pretty safe activity for most anyone.

But I'm still confused... where do the concerns about Indoor Cycling safety come from?