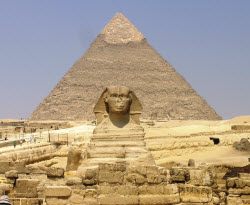 A pyramid is a training technique that is essentially two ladders back to back, one ascending, one descending.  The pyramid begins as an ascending ladder, but the top of the ladder becomes the midpoint, rather than the end.  From the top of the pyramid, the progression of the training variable reverses and decreases in increments that are similar to the way in which it built.

I should clarify that pyramids (and ladders) are not always about increasing and decreasing intensity.  A cadence ladder or a cadence pyramid might adjust the resistance so as to keep the intensity consistent throughout.

Like ladders, pyramids can be done in either an interval or a continuous format.   There are endless ways to approach them.  A fairly standard intensity pyramid using intervals might be:

Here are a few ways you can vary pyramids:

My favorite pyramid is 11 minutes, as 3-2-1-2-3.  This structure provides endless possibilities for class design.

In recent years, the concept of interval training has been popularized.  Maybe over-popularized.  Along with that, a rather major backlash against traditional forms of aerobic training (i.e., “fat burning”) has occurred.  It”™s common lately to read that low-intensity aerobic work is useless for fat loss, that everyone should always do intervals, that “regular” aerobic work causes muscle loss, and more.  I”™ve even read claims that aerobic exercise makes you fatter and stresses the adrenals.

In broad terms, steady state training is repetitive, rhythmic work that maintains a given level of intensity.  The intensity is usually moderate and aerobic because the term refers specifically to exercise that”™s maintained while workload, heart rate, oxygen consumption, and blood lactate remain constant.  During steady state, the removal of lactate keeps pace with its production, preventing accumulation.  As a result, the work can be maintained over a long time.

So this might be along the lines of 20 to 60 minutes at a steady heart rate.  Steady state is a critical aspect of indoor cycling.

What are the benefits of steady-state training?  Depending on the intensity, steady state may burn more calories during the exercise period than interval training.  It”™s also more appropriate for beginners.  It can be done more frequently — daily or even more often.  This last point depends on the duration, frequency and intensity, as well as the set-up of the rest of the training program.

Also, some research suggests that regular exercise encourages people to stick to a diet better. Considering that interval training shouldn”™t be performed daily, steady-state activity might help people stay on their diets.

For indoor-cycling instructors, steady-state training is a chance for us to communicate, rather than just cue the next change.  (Please see “The Art of Cueing” from several weeks ago for topic suggestions.)

Finally, high-intensity interval advocates tend not to take into account that you can go hard and long.  Steady state doesn”™t have to be limited to a recovery class.  It might be a time-trial at 95-100 rpm at threshold heart rates, depending on duration.

These four elements of variation — intervals, ladders, pyramids, and steady state — are tools that enable you to create endless variations on similar class themes.  This method uses both sides of your mind.  Your creative thinking allows you to vary your approach and create concepts.  Your ability to organize and structure what you”™re doing creates a class that makes sense and is easy for the student to follow.