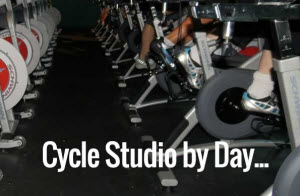 And a cinema at night.

Why is it some crazy ideas don't sound so crazy, once somebody is actually doing it?

For example; who would have thought holding Indoor Cycling classes in a movie theater would be a good idea?

He considered turning it into a recreation center, or a ropes course. But instead, he decided to follow the trend set by Flywheel and SoulCycle, two indoor cycling businesses that regularly sell out classes on summer weekends in nearby East Hampton and add a spin studio to his auditorium. At a cost of around $35,000, Mr. Rutkowski, opened up a few rows of seats, bought a sound and lighting system and 25 spin bikes and did a little cosmetic construction, mostly on his own.

"Now it looks like an orchestra pit," Mr. Rutkowski said. Bikes are covered during movie screenings.

To make the transition, Mr. Rutkowski hired a consultant named Bill Pryor, who opened Spynergy studios in his hometown of Wellesley, Mass., and outside Chicago, in January 2005. Mr. Pryor said he has helped independent entrepreneurs on over 200 business plans in the last 2½ years. On average, he charges $4,000 per client; up to $10,000 if he is helping them from the ground up.

"A lot of studios are adding video to their classes," said Mr. Pryor, who previously worked in the tradeshow industry. "But I've never seen anything like David's done."

Bill Pryor is a long time friend and contributor here at ICI/PRO. Back in 2010 I interviewed Bill about the potential of starting an Indoor Cycling Studio and we are aware of dozens of new studio startups who found their initial inspiration from this Podcast.

After the expense of outfitting a room full of Indoor Cycling bikes, the cost of leasing the actual space for the studio is the biggest expense. And that's if you can find a suitable place to rent. Loud music is a part of any class and many stripmall neighbors aren't super excited to listen to hear Armin Van Buuren  blasting at 95dBs during your 9:30 am class.

Movie theatres play loud soundtracks/music everyday. They have a bunch of parking (another big concern) and most importantly, they have holes in their schedules when they aren't showing movies. Virtual cycling classes using videos are all the rage for Indoor Cycling classes and movie theatres already have a big screen 🙂

Sounds like this could be a match made in Hollywood!

The owner of the private movie house in your town probably knows nothing about Indoor Cycling. But I'll bet they know their cash flow and may be open to a conversation where you bring some additional $$$ into her/his business.