Change in Technology Has Me Re-Thinking Single Leg Pedaling Drills 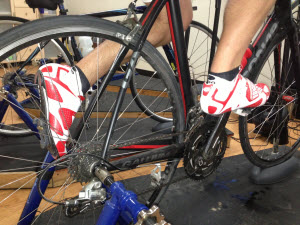 During a class I attending yesterday, the Instructor had everyone doing one-legged pedaling drills... one legged as in pedaling with one foot un-clipped and held out to the side or rested on the frame.

My initial reaction was to do what I normally do in this situation, I would just ignore his cue. Unfortunately I was setup in the dead center of the room and I quickly saw that I would be the one rider (of about thirty) NOT riding with just one leg. So I popped my left foot out and joined everyone else.

OK, so what's wrong with this? Was my first thought, as I began focusing on smoothing out my pedal stroke. This feels like what I remember from riding my old Schwinn Paramount road bike, on a trainer, back in the 90's

Looking around the room, I didn't see anyone riding with any difficulty or appear to be off balance or unsafe. All I saw were cyclists doing exactly what they're supposed to be doing during one-legged drills; trying to make up for the missing leg's influence at the "dead spots" in the pedal rotation - which is the purpose of the exercise. This wasn't a class of cyclists, but rather the typical diverse group of club athletes we all see each week.

So why is one-legged cycling viewed as contraindicated in our classes?

I did a few Google searches for "one-legged indoor cycling class" and found a number of articles, from knowledgeable people, recommending against removing (un-clipping) one foot while pedaling here, here, and here. That last link is from pdf from Spinning called Keep if Safe and includes this:

PEDAl STROKE
Do not pedal backwards or with one foot out of the toe cage or cleat. Pedaling with one leg is an advanced drill that elite cyclists practice on trainers–not fixed-gear bikes like the Spinner bike. On a Spinner bike, these drills have absolutely no benefit, since muscles work the same and burn equal numbers of calories pedaling forward and backward.

While I completely agree that pedaling backwards is dumb/goofy, pedaling with one leg is a very commonly recommended technique, for cyclists of any level.

Another Google search returns dozens of articles and videos advocating for this exercise. None of them issue any caution that this is an exercise reserved for a professional, on the contrary. It's the new cyclist who needs to learn to pedal properly and efficiently.

Here's none other than Joe Friel describing his recommended pedaling drills:

Let”™s get rid of the energy wasters in this Base period. Drills will help you to pedal better. Following are the common ones I use with the athletes I coach. They may be mixed together in a single workout or each may be done by itself as a workout.

* Isolated leg training (ILT) drill. This is the quintessential pedaling drill, the one you should do a lot in the early weeks of Base. It”™s done on an indoor trainer. Unclip one foot and rest it on a chair next to the bike so you are left to pedal with only one leg. With the bike in a low (easy) gear turn the crank at a comfortable cadence. The first thing you”™ll notice is that getting through the top of the stroke, the 12-o”™clock position, is difficult. Focus on smoothing this top transition. At first you may only last a few seconds before the hip flexors fatigue. When that happens switch to the other leg. When it fatigues clip both feet in and pedal for a few minutes applying what you have learned in the single-leg pedaling. Repeat the drill several times throughout the workout.

While I'm the first to raise my hand and say; "just because Joe Friel says something, it doesn't automatically mean that it's applicable to our classes", I'm using him as an example of the clear conflict between what's recommended for indoor cycling vs. outdoor cyclists. Mr. Friel says this is the quintessential peddling drill (representing the most perfect or typical example of a quality) and yet others are saying this will hurt your participants - or is completely useless.

So where's the concern coming from?

Clearly there's a fundamental difference between a bicycle on a trainer and an Indoor Cycle. The bicycle has a freewheel that prevents the monument of the drive-train from pedaling you = you have control to easily stop the rotation. Indoor Cycles (with the exception of the CycleOPs) are fixed gear. The perceived (rightly) danger comes from the heavy, weighted flywheel spinning out of control and potentially carrying the loose pedal into the free leg of the rider.

So why didn't that appear to be a problem yesterday?

We were riding indoor cycles with magnetic resistance. I perceive this has two design differences that mitigate the safety issues that exist, as compared to Indoor Cycles that use friction resistance. If you've had the chance to ride (or your club has updated to) the Schwinn AC, Keiser M3 or Freemotion S11 you'll probably recognise the following;

Is this right for your class?

If you're teaching on a magnetic cycle, you'll have to decide for yourself if you want to add Single/Isolated leg training drills into your class. I wouldn't consider this if you are on friction resistance cycle.

Start by experimenting alone by yourself. Spend some time practicing with one foot detached. How does if feel to you? Could you safely introduce this into your class? Maybe as part of the warmup? How would you cue this?

I'm going to begin on Thursday. My initial thoughts are to offer it, with a modification to stay clipped in of course. I'll find a fun track around 70ish RPM, have everyone dial on a nice flat road feel - just below their base wattage and let everyone experience what it feels like.

NOTE: If you're teaching on the FreeMotion S11.9 cycles, the power readings will be disrupted with either foot un-clipped. You'll want to explain to your class that the power is measured off the left crank. Removing the left foot and using just your right, results in near zero wattage displayed. Peddling with just the left foot appears to confuse the computer and I was seeing what looked like double the wattage. Both the Schwinn AC and Keiser M3 will display correctly.