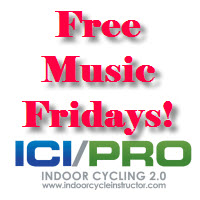 Who was it that decided climbing songs should be slow?

If I tried to stay with the group I ride with on a long climb, grinding along at 60 RPM, I'd be off the back (and on my own) in no time flat.

Sure a climb should make you struggle to turn the pedals - but to replicate an actual climb outdoors, might I suggest having everyone maintain their cadence in the 80s? Or at least the high 70s?

I've been keeping track of rider's cadences during our group rides, especially when the grade turns positive. Anyone who appears strong is spinning smoothly at 75 RPM or more. The grinders hang on for a little while... just a little, before their leg muscles fatigue and someone ends up waiting at the top - to help them catch back on.

Bicycles have gears for a reason. My new VeloVie has 20 to choose from. How I decide which gear to be in is simple...

I select the gear that allows me to maintain my prefered cadence of ~85 to 95 RPM.

Going up, down or on a flat I'm continuously shifting to keep my pedals in this RPM range. The one exception would be on a long downhill where I will have shifted down to the point where I'm pushing a huge gear at ~ 60 RPM. The exact opposite of conventional thinking.

The typical rookie mistake on the road is to wait to shift until the road literally forces you to do something. They're pedalling merrily along during the beginning of the climb, with their cadence slowly decaying and forward momentum slowing. That is until someone stuck behind them (that would be me) yells SHIFT. By that point the damage is done and they've lost touch with the wheel they were following. Riders behind (again me) are forced to pass them and fight to close the gap before we (once more me) get dropped as well.

A more experienced cyclist will respond instantly to the feel of the road pushing back against their pedals and shift gears. Same with any feeling that their legs are tiring and starting to slow. Shifting to maintain or increase cadence moves the production of work from fatigued legs, up to your (hopefully) less stressed cardiovascular system.

Todays free track is at a very powerful 85 RPM - but it's not a flat. Try coaching this as a climb. If you're riding a magnet cycle have everyone add load at 70 RPM until they feel the need to stand > then accelerate to the music's 85 RPM.

Friction folks will have participants find the tempo and then add the hill while staying with the music.

In either case, cuing everyone; "if you're feeling a burning in your legs > you're doing it right :)" "No burning? Then you're not keeping up, slipping off the back and you will be riding home alone!"