What to say about Armstrong? 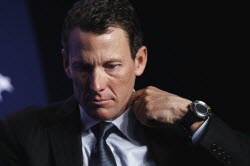 I'm guessing that by now you've had members/friends/family/co-workers who recognize your passion for cycling and have asked you; "so what do you think/feel about Lance Armstrong?"

They obviously don't have to explain their question any further... you already know exactly what they're talking about.

My response has been; "it's complicated... do you have a few hours to discuss it?"

Lance made the idea of identifying ourselves as a cyclist cool. It gave us (40-60 year old men) an activity we could do together... and feel good about it. It became acceptable to wear brightly colored cycling kits (without feeling like a dork) and form-up on regularly scheduled group rides. Occasionally we even communicated - that is when we could breathe.

The idea had us focused on our fitness, largely because we dreaded the thought of being dropped by our group. Many of us came off the couch and completely changed our lives, in pursuit of the idea.

The idea gave us a chance to compete. As men, many of us have innate need to compare ourselves with others through competition.  Sure, we knew there was no way we could every ride in the Tour de France, or even hang with the "A" group, but the idea gave us the motivation to try.  We signed up for bicycle races by the thousands and trained our hearts out... with the idea we could beat someone. It didn't matter who... just someone. When that wasn't enough many of us expanded into multi-sport racing and although we probably can't remember where we placed at the finish, we can explain in great detail the catching and passing a few in our age-group during the bike leg of a triathlon or who we stayed ahead of at the end of a field sprint in a Cat 4 Crit.

Am I disappointed that it appears that Armstrong cheated?  Absolutely. Do I find myself suppressing some admiration that it took so long to catch him? Yes, and I'm sure I'm not alone.

To paraphrase the title of Armstrong's best seller; It's not about Lance. My perception is that the idea has grown so large, has so much momentum, that what's happening to Armstrong today really doesn't matter. Millions of men around the world have adopted the idea completely. The recent events surrounding Lance Armstrong have become little more than a footnote.

Beyond that, expressing any more of this in writing exceeds my ability to type fast enough to keep up with my thoughts.

I'd be very interested in what your response would be in this situation.