A Matter of Perception 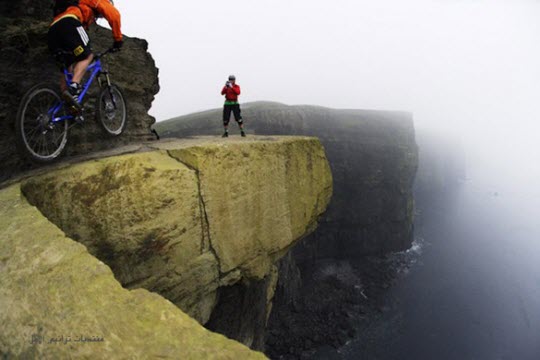 My article about teaching a Cycle Sculpt class, that included using weights on the cycle, brought out a lot of strong comments on my Facebook.  Understandably many of the commentators expressed concerns about safety:

I think the rub for me John is safety. Weights on a bike is an accident waiting to happen. I don't think it is responsible for me to put anyone in my club in a position where I can't keep them safe.

Strength train OR spin. Never both together. Lifting weights on a spinner is unsafe.

All perfectly valid concerns based on each person's perspective of what's safe and what is not safe, in an Indoor Cycling class.

We all don't have the same perspective of safety.

There's a couple in their middle 50's who've taken mine and Amy's classes for years - I will call them Doug and Linda.

Doug enjoys riding outdoors and he often joins us on group rides. He's a reasonably strong rider, with good cycling skills and I enjoy riding with him.

Although she has the fitness, Linda refuses to ride on the road - "too dangerous" she'd tell you. She'll ride in the neighborhoods and sometimes venture out on one of the many biking trails we have here. But that's it. No riding on the road for her.

So who's right here? Doug? or Linda?

A valid argument can easily be made by both. Doug may site thousands of incident free miles - does that make him right? Or if he crashed on his way down of the driveway tomorrow, would that have Linda correctly telling him "I told you cycling is dangerous"?

Is the perception of safety based on the potential of injury?

Crashing a bicycle hurts... a lot. Trust me when I say; I know exactly what it feels like to roll across the pavement at 20 miles per hour, wearing nothing but a helmet, a nylon jersey and Lycra bike shorts. There's a very real potential for serious injury every time I go on a ride. I have had friends hit (and yes unfortunately even killed) by cars/trucks and other cyclists while riding on the road.

Having intimate knowledge of the potential for getting hurt, I still head out on my road bike without a second thought.  It's even worse for Amy on our tandem. She has absolutely zero control from her place as Stoker. She has to sit behind me and trust completely that I'll bring us to the finish safely. Amy has seen first hand what can happen riding with a fast group - when things go terribly wrong and next she's dialing 911 - 3 times to date. She's also the first person to ask; "are we riding tomorrow"? Oh, and Amy  insists that we're leading the fastest group on the road, during any charity ride we're on.

Linda's position would be that Amy and I should stay home and take up gardening - or some other safe activity. Our response would be; while we recognise the possibility that we could get hurt, we still choose to ride outdoors. Basically we accept the potential risk and believe in our own abilities as cyclists to participate safely, in an activity that others would view as too dangerous.

But the comments weren't about your safety John, their concerns were for the safety of the participants in the class.

I've been a sort of evangelist for cycling outdoors, for years. I talk  frequently in my classes about how enjoyable it is to get out and ride. I show videos of beautiful cycling destinations in almost every class. I've lead group rides consistently since the late 90s.  Dozens of cyclists have been personally mentored by me, as they learned to ride properly in a group. Amy's no different. Give her the chance and she'll tell you endless stories about how much she enjoys riding our tandem with our cycling group.

Based on her perception that outdoor cycling as unsafe, couldn't Linda easily say that Amy and I (and maybe you) are promoting an unsafe activity?

As you can guess, my answer would be a firm NO!

I don't share Linda's perspective that cycling is inherently unsafe for myself, Amy or others who I encourage to take up the sport. Why? Because I have years of direct experience that cycling on the road can be safe, if done safely. Is there crazy, stupid stuff that you can do to make cycling unsafe? Of course there is - I choose not to do them, instruct those who I ride with not to do it and am the first (or second as Amy is pretty quick to voice concerns) to reprimand someone who's behavior is endangering themselves or others.