Adding some friendly competition to your class 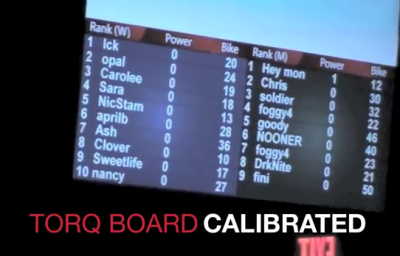 Flywheel Sports is a chain of Indoor Cycling studios who started in New York city. They have had tremendous results and growth, now with 12 locations in three states; New York, Florida and Illinois. A big part of their success has come from a proprietary retro-fit system they have engineered to measure each rider's power and then display the real-time results on a screen. From their website:

... Additionally, for those who thrive on competition, Flywheel has developed the TorqBoard— an in-studio display that provides riders with the option to compare their performance against the rest of the class in real time.

The reason many students come to your class is for the community. Sure you maybe a great Instructor and include a lot of specific training into each profile you teach, but I'm convinced that the added element of friendly completion Flywheel's Torq Board brings is a big part of their success.  Participants who are not achieving their personal fitness goals - read weight management goals - have a tendency to stop coming. We all understand that working harder (when appropriate) in class will increase fitness and burn additional calories. That's why so many of us are excited about power; for the first time our students can truly see what "working harder" feels like. Throw in the friendly completion part and you have the recipe for a fabulous sold out class

Beyond competition between riders, I see a remote display system like Flywheel's TorqBoard as solving multiple problems I'm hearing and seeing at clubs who have (or are considering) adding power based classes to their schedules:

So let's say you think Flywheel's TorqBoard looks like something you would like to have in your studio... you can't have it. It's not for sale unless you are ready to become a franchised Flywheel Sports studio.

Enter Performance IQ and their new Top Power remote display system for studios using any of the Indoor Cycles with Power, including; FreeMotion S11.9, Keiser M3i, Schwinn AC or Spinner Blade Ion. Watch the shot video below to see this plug and play system at work at their second Beta site, Cycle Quest studio where I'm teaching. While it doesn't remove the existing "computer" on each cycle, it does solve the first three concerns I have listed above 🙂

To fully take advantage of Performance IQ's wonderful features, studios will want to offer a Bike Reservation system and data collection system that sends out those wonderful emails to each participant, showing them how many calories they burned in class.