Are you handing out a Spotify card?

She was close to yelling when I walked into the studio. "I'm so excited you came back John!" "I haven't been able to find you on Facebook or Spotify, so I wasn't able to find the playlist you used the last time you were here..."

I subbed last night at the Life Time Fitness corporate HQ club. This participant was there the last time I had covered this class for a friend. I remembered her instantly and how she had approached me after class, asking for the names of two of the tracks I had used. "Are you a Spotify user?" I had asked her. She responded that she was just getting started with Spotify, so I suggested to friend me on facebook and I would show up on her Spotify.

Perfect plan... until she remembered my name as John McCowan and couldn't find me on Facebook 🙁

Which got me to think about an old post I wrote back in 2008. In it, I suggested that Instructors carry and handout a business card (I called it a class promotion card) and showed the card that Amy and printed online. They included our email addresses and class schedules. They worked like a charm, until our classes changed that is. 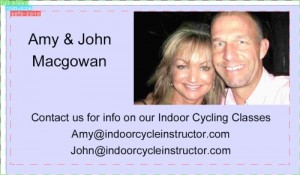 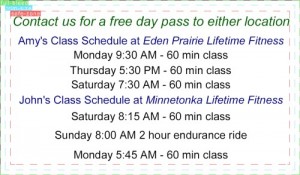 There are a bunch of websites online where you could quickly create a simple Spotify/Promotional card that you could have available to hand out. I ordered mine through www.vistaprint.com and paid $15.95 with shipping. Because my schedule changes so often, I choose not to include it - but you could easily add yours to the back.