NOTE: this was a previous review from 2013 that continues to remain accurate when applied to any of the magnetic friction Indoor Cycles available today.

Many Indoor Cycle manufacturers claim a connection with cycling outdoors:

100% Authentic - Spinning is authentic. It”™s true to its cycling roots, yet refined to a simplicity that makes it the perfect program for any age or ability.

The Schwinn® Authentic Cyclingâ„¢ Series is based on one simple principle: we believe that riding a bike indoors should feel as much like riding an outdoor bike as possible.

There are of course multiple similarities between riding indoors vs riding outdoors. Beyond the obvious differences, not needing to balance an indoor cycle for one, the claimed connection is that their Indoor Cycle feels like riding a bicycle outdoors.

But what does that mean? A feeling can be pretty subjective after all.

My review of the new Spinner® Blade Ion included a comment that I was a little disappointed that Star Trac continued with a friction resistance system, vs. the magnetic systems used by FreeMotion, Schwinn and Keiser.

I also teased you at the end of the post with:

My apologies for the delay. I'm just getting to this today.

The " little experiment" I conducted was something that I'd wanted to confirm/quantify for years, actually since I first started teaching on a Schwinn AC in 2010.

My early experiences riding/teaching with magnetic resistance, along with a discussion I had with Keiser's President Dennis Keiser, demonstrated to me that the amount of resistance created by the magnetic (Eddy Current) resistance system increased in lock step with a faster cadence / RPM. The faster you pedaled the harder (more force required) it was to turn the pedals.

Which is pretty much what you experience riding a bicycle outdoors, at speeds over 18mph. As you pedal faster (assuming you stay in the same gear) you and the bike move faster through the air. The faster you go, the more the resistance from the air pushes against you, making it harder and harder to turn the pedals.

There's a handy calculator to compute the amount of work it takes to overcome the resistance of the air here.

So it takes apx. 300 watts to ride at 25 mph. To ride at 30 mph (just a 20% increase) you need to create over 60% more power. You can't make the power with additional leg speed - you're probably near your maximum efficient cadence already at 25 mph. To get to 30 mph you'll need to shift to a lower gear and push harder... A LOT HARDER!

Very different from the conventional friction system on an NXT - which (to me) feels like it gets easier to pedal, the faster I pedaled. In fact most of us can take what is a high level of load (at a slow cadence) and accelerate to the point where our legs spin-out and won't move any faster.

Side note: It's extremely rare to see someone riding with excessively high cadence on a magnetic resistance indoor cycle.

I've discussed this concept here in the past, but I couldn't prove or demonstrate it. I even went so far as contacting LOOK and Garmin to see if they would lend me a set of those new pedals with the built in power meter. They wouldn't and the crank arm from my FreeMotion doesn't fit on a NXT. It remained a mystery until now.

So while I was at the IHRSA convention, I finally had the chance to compare the new Blade Ion and the FreeMotion. With both cycles offering "measured power" I felt it would be a fair comparison; Magnetic vs Friction Resistance. Which best replicates riding outdoors?

Although I wasn't exactly "scientific" in my test protocol, nonetheless the results were very interesting. 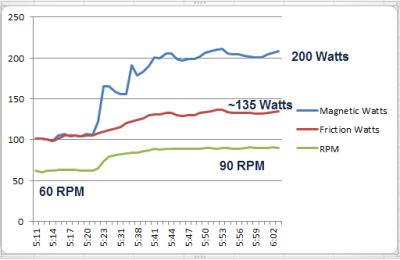 Here's what I did

My test was admittedly simple. After completing an early AM ride with Josh Taylor, I spent some time riding both the Spinner Blade Ion and FreeMotion S11.9. I began by establishing a steady 60 rpm cadence. Then I added resistance until the power meter showed 100 watts @ the 60 rpm. Then I accelerated to (and sustained) 90 rpm and took notes on what happened. I rode both cycles twice and the results were consistent. The blue Magnetic Watts line is more squiggly than the red Friction Watts line because I used the actual date set I downloaded directly from the FreeMotion's USB port.

I'd already tested the FreeMotion S11.9, so I knew that the 50% increase in cadence would result in a doubling of power. Perfectly consistent with my understanding of how Eddy Currents increase linearly with speed. A 50% increase in RPM = a 50% increase in resistance. Although math isn't my strong suit, it's easy to see how a 50% increase in Speed multiplied by a 50% increase in the amount of force required to turn the pedals = a 100% doubling in power/wattage. While not the same effect as what you'll find chasing down a breakaway at 27 mph, it is enough to force your students to work hard in a way that will help prepare them to hang with the "A" group.

The Spinner Blade Ion reflects the inherent weakness of using a friction pad with a heavy, perimeter weighted flywheel. The graph above clearly shows how the amount of resistance doesn't increase with additional speed - it actually goes down, validating what I had hoped to demonstrate. If it just stayed the same I should have observed 150 watts @ 90 rpm, I only saw 135 watts. So where did the other 15 watts disappear to? That's a math thing I'll leave to others smarter than me to answer. I will offer a guess that if I had continued on to 120 rpm, I would have seen a progressively lower increase in wattage vs what would be expected from a doubling of speed.

So what's this all mean?

Short answer - it's my opinion that magnetic resistance is superior in every way to a friction system.  Besides being zero maintenance, the linear increase in resistance is much closer to what your participants will experience outdoors. Combined with the reduced inertia of the aluminum flywheel, magnetic cycles require more work to ride and force everyone to develop better pedaling technique. IMO the net results is that the members of your club or studio will (if they take advantage of it and you coach them properly) receive a more effective workout, that will translate to them becoming stronger outdoor cyclists.

So does that mean you wouldn't recomend the Spinner Blade Ion?

Not at all... it's an awesome cycle and that battery charger rocks. The purpose of this article was to demonstrate the differences so you can make an informed decision on your own. Besides, if you're a Spinning® studio, what other choice do you have?

P.S. If you're going to be at WSSC - I'd love for you to try and replicate my test on a Blade Ion for yourself. Then report back with what you find 🙂