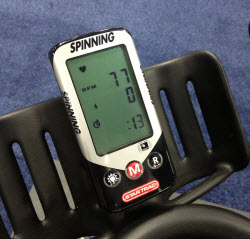 Star Trac had the new Spinner® Blade Ion on display at IHRSA. I rode one during Josh Taylor's 6:30 am demonstration ride this past Thursday. After the class I discussed the Ion's new features with Josh. I then got an overview of Spinning's new Spinpower™ education from Program Director Angie Sturtevant, which I'll share as a separate article.

The "Ion" differentiates this bike with Power from the conventional Spinner Blade. It uses the same chain drive and friction resistance system, found on all Spinner® Indoor Cycles.

Very simple... and I'm a huge fan of simple, so right away I appreciated how easy it was to use the Ion's console. I was told they are making a few minor changes so the final version may look different. Working down from the top, the display shows:

Josh made the point during his demo ride that their console will show ZERO watts when there's no resistance, regardless of the cadence = this will show all of our "spinners" that they aren't doing any real work until they've added some load. 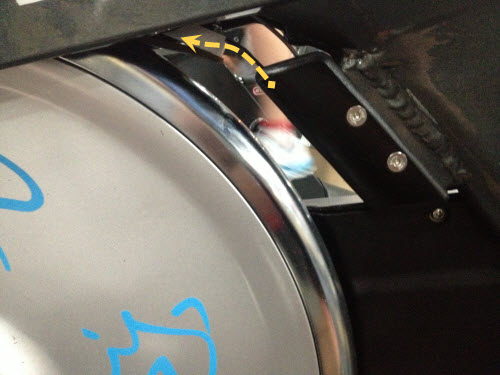 Strain gauge measures the amount of pull on the brake pad.

The Blade Ion measures power with a strain gauge connected to the brake pad - again more simplicity. This technique is actually over 100 years old and how the horsepower of early engines was measured; by measuring the force acting on the brake, as the flywheel tries to drag the brake around it's circumference.

If you have an NXT available you can see exactly what they are doing. Remove any resistance and start the pedals turning slowly. Now carefully touch the slowly turning flywheel with one finger. Feel how it wants to drag your finger along? Can you see how the harder you press against the flywheel, the more effort it takes to hold your finger in place? By measuring that force, the speed of the rotating flywheel and then doing a bit of math, we could calculate Power.

That Black Box contains the strain gauge and replaces the normal brake pad holder on the standard Blade or NXT - which begs the question; will they ever offer a retrofit power meter for older NXT's?

I was told that the Ion will be factory calibrated and that no other calibration will be necessary - which I find very hard to believe.

This isn't the right time to get into a lengthy discussion over what I see as fundamental differences between; how the Ion measures the amount of Power coming out vs. how FreeMotion (and also any bicycle crank arm/spider or pedal based power meter) is measuring the amount of Power the rider is putting into the cycle. Or if it's really of any value...

So I don't leave you hanging here, the factory calibration may indeed accurately display the amount of coming out of the Ion forever... but does that precisely reflect the amount of power the rider is putting into the cycle?

What I'm questioning is there's a lot of drive train (multiple bearings and the chain) between the pedals (work in) and the brake mechanism (work out). This engineering article describes the efficiency of bicycle chain drive system and how losses can vary between 2% and 20%. I'm sure Star Trac's engineers have a very sophisticated algorithm to work all this out on a new Ion - but what happens over time? Worn chains and bearings, sprocket alignment and chain tension will all have an effect. Potentially some of the Ion's in your studio could become favorites because they display a higher wattage, relativity to the amount of work introduced by the rider, simply because its chain is in better alignment. Does that make sense? 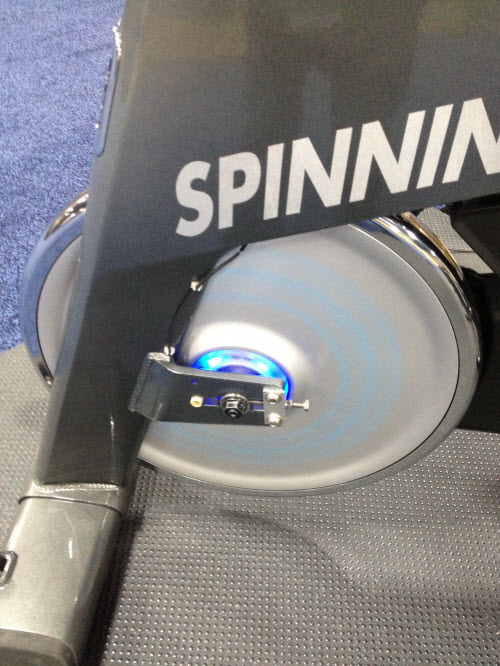 Angie said she likes this because it's "green" (no batteries to throw out) - this blue light is a very cool touch.

Hands down my favorite feature of the Ion is how it charges itself. Josh told me that it incorporates a smart charging system that will allow the batteries to discharge before recharging. That wire runs from the hub charging unit & cadence counter up to the handle bars. 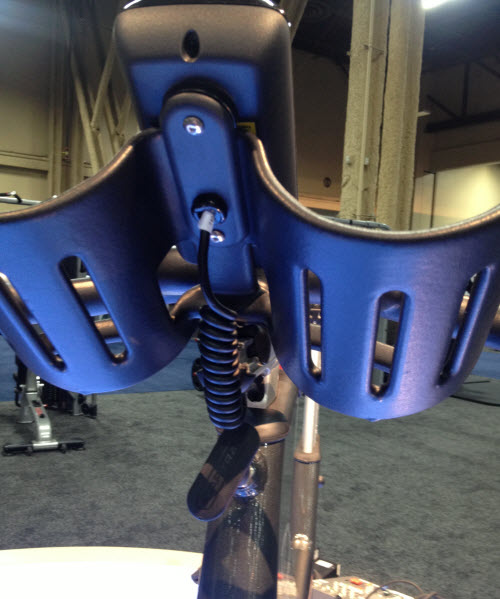 How it felt to ride & my overall reaction. 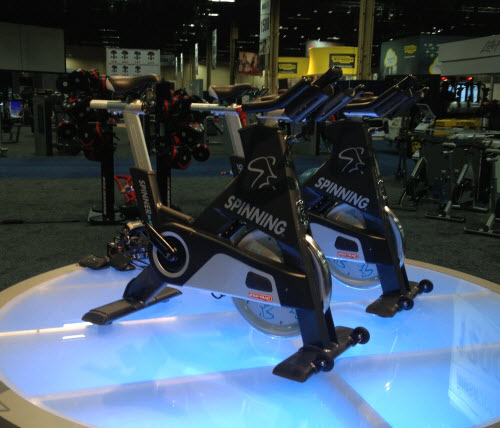 Let me start by saying Star Trac makes a phenomenal Indoor Cycle. Solid and smooth - I'm sure Jeff Wimmer had his hands on these. They fit me perfectly - or after riding & teaching on them for all these years do I fit them perfectly? Either way they're very nice to ride... and you hear the yeah-but coming... but I've really become a fan of magnetic resistance over the past 4 years. I understand how Spinning's®  brand goes to the "feel" of a Spinner® and that "feel" comes in part from a friction based resistance system. I prefer riding magnetic and was disappointed that the Ion still uses a friction brake.

I also felt weak/less powerful on the Spinner Blade Ion. Or said differently, for a given amount of effort, I was seeing a lower wattage number than I'm used to seeing from a recently calibrated FreeMotion or a Schwinn AC. You could add embarrassed to my list of feelings. I actually felt compelled to cover my readings while Josh was off the bike checking in with his class 🙁

Thinking it may just be me, I went directly to FreeMotion's area and jumped into a class with Cameron Chinatti. Nope, it wasn't me. There on a familiar cycle, I was seeing/feeling my normal ~250 FTP. So back to the Ion (different bike this time) but the same results. A similar effort/HR and only saw ~180 watts.

I talked to Angie about this and she suggested that you just can't compare the two, they're different. I've asked Angie to join me on the Podcast to discuss this in detail and will let you know if/when she'll come on as a guest.

Later that morning I also tried a little experiment that I've wanted to do for years...

You can read my follow up article to learn more: Comparing Spinning”™s® Friction to FreeMotion”™s® Magnetic Resistance

Stay tuned for the results + some thoughts on Spinpower™ later this week.