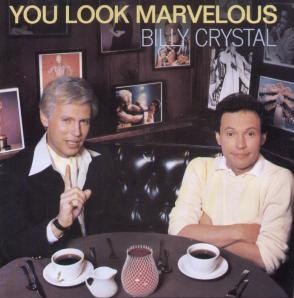 If you promise me that you won't get a big head, I'd like you to go look in the mirror and repeat after me;

"I'm a celebrity and it's about time that I started acting like one."

The dictionary lists ce·leb·ri·ty [suh-leb-ri-tee]  as a noun meaning 1. a famous or well-known person. If you've been teaching for a while, I'm going to guess that within your little world, you are well known = you are a celebrity 🙂

So if the though of you as a celebrity is intriguing, here are a few things you can work on...

Fernando's lines; "You look marvelous my darling... you really do!" and "It is better to look good than to feel good" launched the career of Billy Crystal back in the 80's. Your shtick may not be as corny as Crystal's, but what made these lines so memorable were how Billy delivered them with an accent that many of us have tried to imitate. A very popular Instructor I know starts every class with "GOOD MORNING MINNETONKA" with a delivery fit for the opening of a World Wrestling Match or Boxing title fight. People in her class look forward to it in every class and would feel something was missing if she didn't do it.

Consistency is key to both your Shtick. What you say and how you say it should be unique and your delivery should be as consistent as possible.

What's the first thing you think of when I say the names of these famous singers; "Lady Gaga?" (her wild clothes) "Bono" - lead singer with U2 (his sunglasses) Brett Michaels (bandanna head wrap) "Dolly Parton"  (her... wigs) you get the point.

What would be wrong with having a consistent song for your class intro [wlm_firstname]? A song that your students begin to associate with your class?

There's a great article at the Wall Street Journal  about Rock Star Instructors and what they do to promote themselves.

Gyms are experiencing a surge in the popularity of group fitness classes, and as they move out StairMasters to make way for aerobics studios, they're finding that the linchpin of a successful class is a charismatic instructor. Often former dancers or musical theater dropouts, instructors motivate students, mostly women though some men too, to pack themselves like sardines into a studio and to come back, again and again.

A demi-class of female friendship is developing: the fitness instructor and the student. "My friends and I always gush about the instructors we have a girl-crushes on," says Katie Lee, a writer and TV personality in Water Mill, N.Y., who takes spinning classes about four times a week.

Instructors market themselves on the Web by teaching free classes on Google+ Hangouts. They attract followers by posting videos on YouTube and offer daily affirmations to sometimes tens of thousands of Facebook subscribers.