Do you deserve a raise? 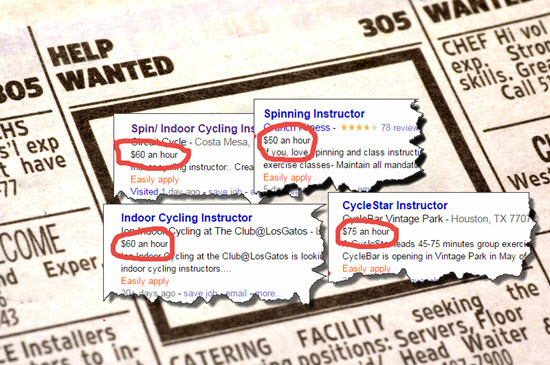 What I've described as the “SoulCycle Effect” appears to have caused a nice jump in the starting rate for IC Instructors. At many new boutique studios, the $50 – $75 per class rate advertised is the starting base pay rate. Consistently fill the room and the added $'s per-head incentives you'll receive could push your pay to $125.00 or more per class. Teach just six classes a week and you'll be making $15,000 to $37,500 a year… for a part-time job.

I don't know about you, but that's real money to me!

Large health clubs are sensing competitive pressure from small/boutique fitness studios and it scares them. Not only are they losing customers, they're also watching their best Instructors walk out the door to join a startup down the street.

How do I know this? Because it was a common theme voiced by multiple club owners and equipment distributors I spoke with last month at IHRSA.

Which is a 180° flip from six or so years ago. That's when the small/boutique studio boom was ramping up. Then a fitness entrepreneur's primary strategy was differenciation. What can I do to be different from the local Big Box? Now it's the owner's and managers of these same large fitness clubs asking the same thing – LOL!

If it's been awhile, you're probably due a raise

If it's been a few years since your last review, now is probably as good a time as any to ask for an increase in your per-class rate.

Do a little research to learn what other studios near you are offering. It wouldn't hurt to graph out your class attendance and possibly list all of the times you agreed to sub other Instructors classes – so you can demonstrate your value to the business. Then be brave, schedule an appointment and politely ask for a raise. Unless you're a real flub, or there's no other option where you can teach, your current employer will want to retain your services = will want to keep you satisfied and offer you some additional $$$.

If that doesn't work – you can always check indoorcyclinginstructorjobs.com to find a studio who would love to have you on their team 🙂