ElliptiGO – could this be the next Big Indoor Cycling Thing? 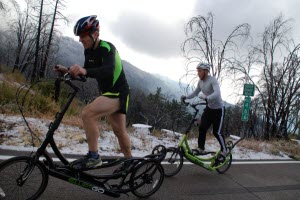 Gary Hawkins from Ride Fit contacted me last week about a new virtual cycling training video he had produced. Except this video doesn't feature typical cyclists - it's designed for people who train indoors on an ElliptiGO.

If you've never heard of an ElliptiGO you can join the club - it was completely news to me. But they are supposedly getting popular and they even have their own World Championships.

You can view the Ride Fit trailer below.

Now why am I asking if this could be the next big thing?

When I first watch the video I have to admit I thought they looked a little goofy to me. An elliptical for the road? Who would want that?
I called Gary and asked him; "who's buying these ElliptiGO things?"

"Mainly runners." "They really like how low impact they are to ride."

The indoor/outdoor cyclist in me started to say something snarky about people who choose to punish their bodies because they aren't smart enough to use the wheel... but I caught myself and asked Gary; do you know how many runners there are, compared with cyclists?

"Not sure, probably a lot more."

So I checked and after a quick search it looks like committed runners out number committed cyclists by something like and an order of magnitude = 10 times as many runners.

Many of us are trying to build our classes by attracting cyclists. What would happen if we offered a group class that appealed to all those runners?

Maybe Johnny G had it 1/2 right with the KrankCycle? Some people just don't want to ride a bicycle, so why not create a group cycling/training experience that appeals to runners?

Right now the indoor option is using a trainer. Could a dedicated indoor version be far behind?
Would you teach an Indoor Elliptigo class?