ICI Podcast 280 – Use your studio as a marketing platform and get free publicity! 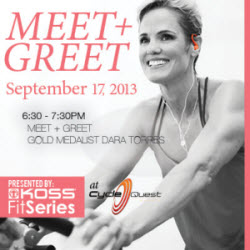 Dara was in town to promote the new women's specific FitClips headphones she helped design for KOSS Headphones. They also seem to work just fine for men - the pair Dara gave me fit really well, that is after she showed me how to insert them properly.

What was really unique about this promotion was how they used Joe's studio as the place to demonstrate the FitClip headphones to members of the media that included; multiple on-air personalities + a half dozen local bloggers. Each Keiser M3 was wired so each rider could experience the class through their headphones, instead of the studio's sound system.*

I met with Dara in the morning and recorded this short interview.

Then in the afternoon Dara and Joe lead a fun class for all the media folks and a number of Cycle Quest Instructors. 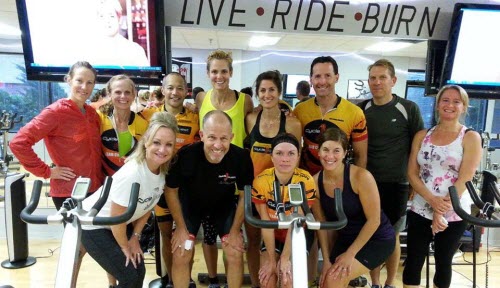 I waited a few days, before posting this, in order to see how much promotion resulted for KOSS and Cycle Quest. Here's what I've found so far - with a few more stories not yet published.

Article in our major newspaper; the Star Tribune

Would something like this work for your studio? It wouldn't have to feature Dara Torres, I'll bet there's a celebrity who lives near to your studio and they're likely to be connected to some product or service that you could help them promote 🙂

I'm not sure where else KOSS and Dara plan to hold these events (they've done a few already), but I have their contact information and could forward your info on to them if you'd like to be considered. Just leave a comment below.

*This actually reminded me of the very early days of Spinning classes, at the Flagship Athletic Club where Amy taught back around 1995ish. The 25 or so Schwinn built JohnnyG Spinners were set up in a corner, but not a closed room, so music from the class would be disruptive to the other areas of the club. So instead of speakers, we all wore headsets connected to a Walkman /portable radio that was tuned in to an FM station to hear the music and Instructor's cuing. At times this was a real hassle, but riders rarely talked during class and there was something special about having the Instructor's voice right in your head 🙂