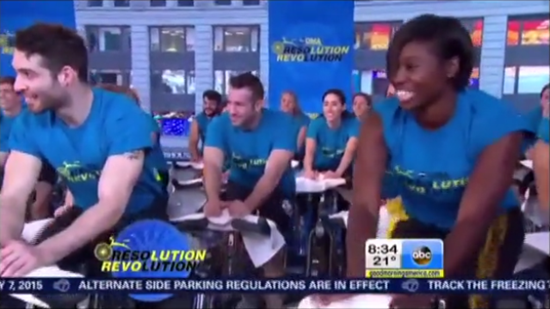 Five million viewers of ABC's “Good Morning America” TV program were treated to a wonderful promotion for Indoor Cycling this past week. As I watched I just couldn't help myself and began humming REM's Shiny Happy People. That was exactly what I was seeing > hundreds of shiny, happy people enjoying riding inside. I can't think of a better way to kick off 2015!

What a way to jumpstart January! SoulCycle joined Good Morning America today for its Resolution Revolution. We tapped it back on SoulCycle bikes in their dressing rooms and hallways as well as in Times Square – while GMA showed live feeds from Soul classes happening in Bethesda, Chestnut Hill, Coral Gables, Short Hills and West Hollywood! Check out this video clip of all the action, including an interview with instructor ANGELA DAVIS on how to stay motivated as well as an update on our SoulScholarships Program. It was a good morning, indeed!

Here's the video of the event if you haven't seen it.