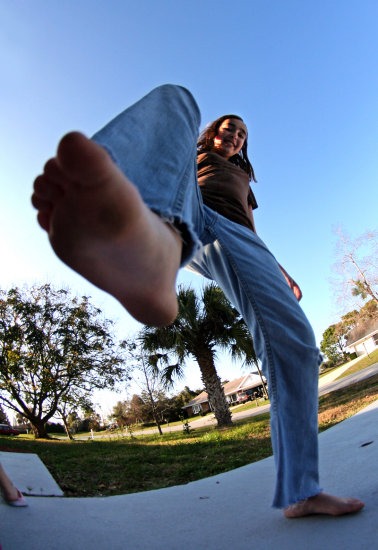 If you”™ve done stomps in your cycling workouts, you may think I”™m crazy when I say this, but I”™ve always liked them. They”™re extremely tough but appeal to that twisted part of me that enjoys hard training. (I know: you”™ve got that part, too.)

If you haven”™t done stomps, they”™re designed to increase power in the saddle. I believe Chris Carmichael is generally given credit for the training, but his guidelines differ from the ones I know. The Carmichael method involves 15- to 20-second stomp intervals. Here's Chris' description at www.active.com

In Performance Max, the program created by Jim Karanas, we used 60-second intervals with a 60-second rest, and followed the format below.

A solid warm-up is essential, since stomps are difficult and can stress the knees and the lower back. Roll the legs for several minutes. Begin an alternating pattern of 2:00 of seated high cadence (110-120 rpm); 1:00 of 80-rpm standing runs; 1:00 seated with resistance at 80 rpm; 1:00 of recovery at 90 rpm. Go through the pattern several times, as your group requires. Change the order, if desired.

A stomp interval is 60 seconds; the recovery interval is 60 seconds. Allow 22 minutes for 10 stomps: a set of 5, a short break, another set. The break I used was 3 minutes total: one minute of the usual recovery after stomp #5, then 2 more minutes (sit out one stomp cycle). It”™s enough, but you could go longer. Resistance during stomps is high to very high and drops during recovery. Recovery cadence is individual, but I suggest 90 to 100 rpm.

- Stomp at 80 rpm. Fatigue will tend to slow the legs, so it helps A LOT to have an 80-rpm song to beat-match. We almost always came back to Hallogallo by Neu! because it”™s a pretty precise 80 rpm. The fact that it”™s 10 minutes long helps sustain the energy of the training. Play it twice or change music for the second set.

- Keep the body centerline on the bike. During the stomp, don”™t move side to side, as you would in climbing. Keep hands in position 1.

- Rules for a beautiful, circular pedal stroke don”™t apply during stomps. Exaggerate the down-stroke and smash against the resistance, without moving the body side to side. I cue it as “punching the pedals.”

- Heart rate isn”™t the point. However, there are no HR limits on this exercise, and HR can spike quite high if the rider is seriously stomping without modifying the resistance. (Intervals under 60 seconds may yield lower heart rates.)

Avoid longer stomps. One instructor used 90-second stomps, but that means easier stomping, so what”™s the point? A full-out, 60-second stomp will start to bring on failure at the 50-second mark, so 90 seconds requires reduced intensity. That makes it … something, just not a stomp.

Avoid “mushy” cueing. The instructor of the 90-second stomps would cue the stomp with, “Okay, you guys, do another stomp now.” There”™s NO WAY that will elicit a stomp from your riders. It will get you something, but absolutely not a stomp.

One time, the above instructor”™s cue was so mushy, I actually missed the start of the interval. That simply never happened when Jim Karanas cued stomps.

So I recommend Jim”™s cueing. It starts about 5-6 seconds before the stomp interval. In a firm voice, say, “And load the bike … AND … STOMP!” The slight pauses and the delivery are intended to let the word “stomp” hit the first second of the interval. Cue time during the interval — say, at 30 seconds and again with 10 to go.

If there”™s a way to use some feature on the resistance knob to mark the resistance used on the last stomp, it makes things much easier than trying to re-determine resistance for each interval. Cue that reminder for your riders.

Resistance can be ferocious during stomps. Every time I do them — about 8 trainings per year in the PMax calendar — I notice that, despite growing leg fatigue as the intervals proceed, I can still raise the resistance for each stomp. Don”™t ask me to explain that, but it”™s too consistent to be a fluke. It even happens when I do stomp training on my own. As a result, I started cueing the riders to keep increasing the resistance so they”™d get the added strength benefit.

If you use high-intensity intervals in your classes, this training could fit right in with your approach. Because the emphasis is on strength and resistance, stomps may offer variety, say, a change from speed intervals. If you try stomps, please let me know how they work for your classes.